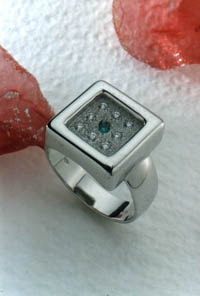 This year the prestigious “Baschirotto” award in Human Genetics is attributed to a great world-renowned scientist: Prof Dirk Bootsma from Rotterdam.

Once again thanks to the Association for Rare Diseases Baschirotto, Vicenza takes part in a very important scientific meeting, presenting its prestigious goldsmith’s art, through of an aspired award for the one who gave a main and innovative contribution to genetic diseases research.

The award consists of a beautiful white gold ring depicting the logo of the Association for Rare Diseases “Baschirotto” through a refined composition of diamonds with an emerald-cut drop in the middle, to celebrate the “marriage” between the scientist and the research, because his important discoveries have added precisely the precious “ring” at the wonderful chain of knowledge developed by humanity.

This jewel has been made by the skill and creativity of the goldsmith “Sinico” company from Vicenza, thanks to the willingness of its owner, Mr. Walter Sinico, belonging to the Goldsmiths’ section of API. The ring is offered by the Small and Medium Industries Association of Vicenza, which with great sensitivity supports the scientific research, encouraged, funded and conducted by “Mauro Baschirotto” Association for Rare Disease at the Institute for Diagnosis, Therapy and Care (B.I.R.D. Europe Onlus) at Costozza of Longare (VI).

It is a unique piece, especially designed, valuable and meaningful of meaning symbol, that reminds our city to European scientists. The creative efforts of Vicenza in the industry, but also in solidarity can develop works of art of high value. The award, which also consists of a plaque and a sum of 1,500 ECU, was delivered in the opening ceremony of the Meeting of the European Society of Human Genetics, which had taken place in Amsterdam in plenary session at h. 15.30 on Saturday 27 May ’00 in the presence of 800-1000 researchers.

What made that year especially beautiful and important was that the Prof. Dirk Bootsma was one of the first to identify and reproduce in laboratory a DNA region involved in the tumor-specific translocation: the Philadelphia translocation involved in Chronic Myeloid Leukemia. He also studied the genetic causes of rare diseases with tumor manifestations such as Xeroderma Pigmentosum, and others.

Prof Bootsma’s work and those who care about Human Genetics is very important for families and patients and is a great hope for those affected by rare diseases but also for those who are suffering from the most common forms of disease for example tumors.

This website uses cookies to improve your experience while you navigate through the website. Out of these, the cookies that are categorized as necessary are stored on your browser as they are essential for the working of basic functionalities of the website. We also use third-party cookies that help us analyze and understand how you use this website. These cookies will be stored in your browser only with your consent. You also have the option to opt-out of these cookies. But opting out of some of these cookies may affect your browsing experience.
Necessary Always Enabled
Necessary cookies are absolutely essential for the website to function properly. This category only includes cookies that ensures basic functionalities and security features of the website. These cookies do not store any personal information.
Non-necessary
Any cookies that may not be particularly necessary for the website to function and is used specifically to collect user personal data via analytics, ads, other embedded contents are termed as non-necessary cookies. It is mandatory to procure user consent prior to running these cookies on your website.
SAVE & ACCEPT
error: Content is protected !!